Home » Blog » To get children and happiness of children, observe the fast of Skanda Shashthi.

To get children and happiness of children, observe the fast of Skanda Shashthi. 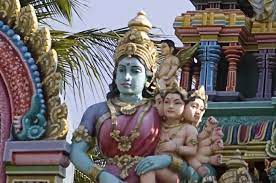 The fast of Skand Sashti is observed on the Pashti date of the Krishan Paksha of the month of Karthik. The
day of Pashti in the Shukla Paksha of the month of Chaitra is called Skand Pashto. This fast is also known as
Santan Pashto. The Skand Puran holds a record of a conversation between Lord Narayan and Narad in
which this fast is mentioned to offer a child as well as to take erase the befalling on a child. One should
fast from the day before Pashti and worship Lord Kartikey on Pashto. Skand Pashti is highly regarded in
Tamil Nadu. This fast has been followed since ancient times. Hence, the fast take on the form of a
festival. It is believed that King Sharyati and Bhargav Rishi Chyavan’s story is connected to the Skand
Pashto fast. It is believed that by observing the Skand Pashti fast Chyavan Rishi received the vision of his
eyes. It is written in that Brahmavaivart Puran that by the blessings received by observing the Skand
Ppashti fast the dead baby of Priyavart gained life. The Skand Pashti puja is an ancient ritual. Lord Shiv’s
son Skand was raised and protected by the six Kritikos. He has six heads and was also called by the name
of Kartikey. By worshipping Lord Kartikey on the Pashti of Bhadrapad in Dakshinapath, even sins like
Brahma Hatya is forgiven. Hemadri Krityartnaakar took examples from the Brahma Puran and said that
Skand was born from the fire on amavas. He was born on the Pashti of the Shukla Paksha of the month of
Chaitra. He was made the commander of the army by the Gods and defeated Tarkasur. He is worshipped
by offering to Him lamps, clothes, and ornaments. For the good health of the child, He should be
worshipped on every Shukl Pashto. An image or idol of Lord Shaligram, an image of Lord Kartikey, a Tulsi
plant, a small bronze pot, coconut, puja samagri like kumkum, turmeric, sandalwood, herbal colors,
Diya, ghee, itra, flowers, milk, water, mausami, meva, and an aasan or a mat to sit on, are the
things that are required for the puja. Observing this fast religiously provides one with a child. This fast
protects the child from suffering and bad health. Lord Shiva and Goddess Parvati are also worshipped on
the day of Skand Pashti. The Sthapna Puja of Skand Dev Lord Kartikey is performed. Numerous diyas are
lighted. Devotees recite the Nitya Paath of Skand Pashti Mahatmay. The Lord is given a bath and is
adorned with new clothes and worshipped. The Lord is offered food on this day. Prayers made for the
fulfillment of an important task prove to be beneficial. Saadhak Ttantra Saadhan is also performed.
Meat, alcohol, onion, and garlic must not be consumed and it is necessary for one to follow the strict
rules of Brahmacharya. It is learned from the scriptures about Lord Kartikey’s birth that when the terror of
evil was spreading and even the Gods had to face defeat, they went to lord Brahma to seek protection.
Lord Brahma replied that the leader of the demons Tarak could only be killed by the son of Shiv. But
after the death of Sati, He was deep into meditation. After many plead from the Gods, Lord Shiv
married Goddess Parvati. And so Kartikey was born who defeated Tarkasur and returned the Gods to
their place. Lord Skand is very powerful. The Gods offered Him the rank of the Commander of the
armies. Riding a peacock, Lord Kartikey is worshipped the most in South India and is known as Murugan.
Victory, comfort, and discipline, all of are attained by the blessings of Lord Kartikey. The major God
of Skand Puran is Lord Kartikey and this Puran is the biggest amongst all. Major temples of Lord Kartikey
are in Tamil Nadu.