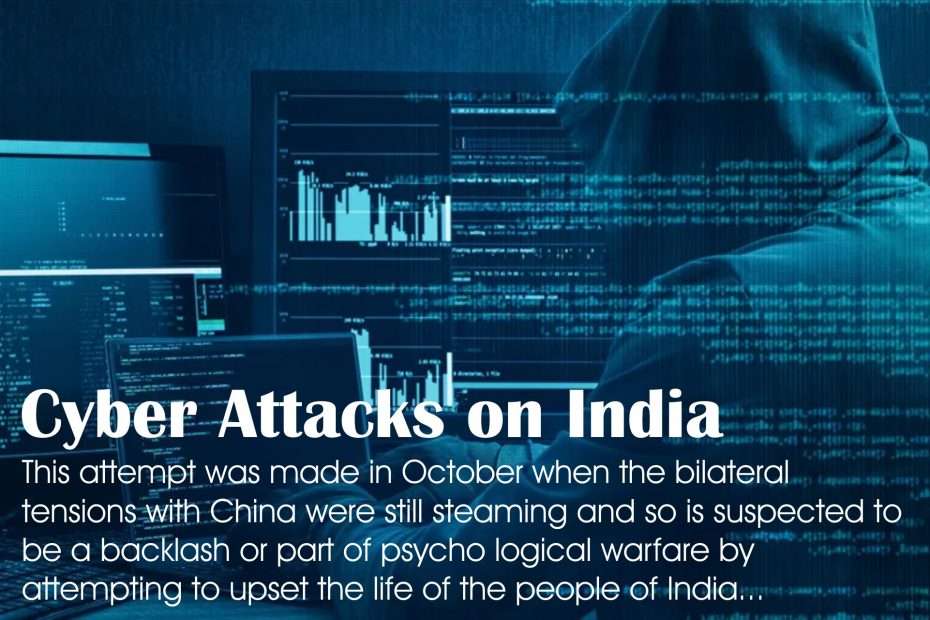 power outage in Mumbai took place on12th October which impacted the stock market, trains, and several households. This was initially said to be because of a manual error. But recently an enterprise-based security outfit based in Massachusetts (U.S.) named Recorded Future offers proof that the power outage was are sult of a cyberattack attempted by a Chinese group called Red Echo. RecordedFuture was able to detect within network intelligence that servers used by Red Echo were receiving high volume traffic from Indian power sector assets. Recorded Future further revealed that the actual number of power infrastructure units targeted by Red Echo was much greater in number than just the ones in Mumbai and are spread across India. It said 10 distinct Indian power sector organizations were targeted, including four Regional Load Despatch Cyber Attacks on India.

Centers (RLDCs) are responsible for the smooth operation of the country’s power grid by balancing the supply and the demand for electricity. Red Echo used malware called Shadow Pad, which involves the use of a backdoor to access servers. This attempt was made in October when the bilateral tensions with China were still steaming and
sois suspected to be a backlash or part of psychological welfare by attempting to upset the life of the people of India.

This is rather disturbing. To think that it is possible for the enemy to disrupt the power supply in the financial hub of the nation simply via technology without the requirement of any physical filtration or trespassing into the actual infrastructure. But does this threat only loom over India? A cyberattack in Ukraine nearly 6 years ago had left 50,000 citizens without electricity. Power grids already had electronics deeply embedded in their functioning. Now with growing renewable energy usage, the components being used greatly increase the sensors and connections along with the network. Power grids across the world are becoming more vulnerable to cyber-attacks. The Internet of Things and smart applications to control electronics within one’s homes also create vulnerabilities.

A Chinese hacker group known as Stone Panda made cyber attacks on Bharat Biotech and the Serum Institute of India. These companies have developed Covaxin and Covishield, which are currently being used in the national vaccination campaign. These companies a real so testing other variations of vaccines so that affordable versions could be made available for the poorer nations. The objective behind this attack can definitely be to disrupt India’s
possible share in the Covid vaccine market which would step on China’s. It is clear that handling the Chinese goes much beyond maintaining peace on the borders. India needs to get its house in order with a clever enemy sitting
right next to it. This augments the urgency to reverse the brain drain and keep talent from leaving India. We need a cadre of proficient and skilled professionals. The employment crisis must be solved and the state of the economy
must be rectified. With the world looking for an alternative to China, India can welcome foreign firms to set up shop which will create job opportunities. The Chinese must be beaten at their own game manufacturing and trade in the
global value chain.