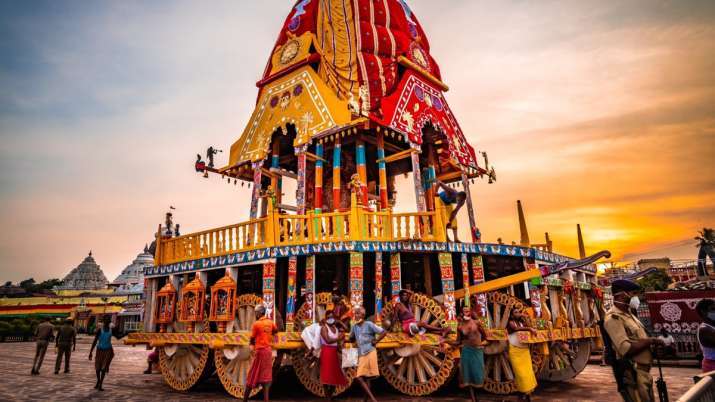 The celebration of Rath Yatra of Jagannath Puri is popular worldwide. The celebration will begin on the
sixth of this month and will continue for ten days till the 16th. This time to devotees gathered from
around the world

Shall witness the splendor of this great event.
for all the grand celebrations in India, the Rath Yatra of Jagannath Puri is of great importance. The Rath
Yatra is not only of importance to the Indian devotees but also attracts devotees from other countries.
The Punya received from attending the Rath Yatra is considered to be greater than that of 100 yagyas.
The Jagannath Temple of Puri is the center of devotion and is crowded throughout the entire year by
devotees. The temple is famous for its magnificent sculptures and its splendor. It is most impressive to
see the grand chariots of Lord Jagganath, his brother Balram and their sister Subhadra and the great
crowd of devotees to witness them. During the Rath Yatra, the devotees also get a chance to go up to the
idols themselves. This festival lasts for ten days. The festival begins on the day of Shree Ganesh Akshay
Tritya by building the raths of Lord Krishna, Balram, and Subhadra. Some rituals are also followed during
this period. The rath of Lord Jagannath is called Garuddhwaj or Kapildhwaj. The rath has sixteen wheels
and is 135 meters high. It is decorated with yellow and red colored cloth. The vaahak of Lord Vishnu,
Garud protects the rath. The flag on the rath is called Trelokyamohini. Balram’s rath is called Taldhwaj
and is 132 meters high and has 14 wheels. It is made of red and green colored cloth and 763 pieces of
wood. The protector of the rath is Vasudev and the charioteer is Matali. The flag of the rath is called
Unani. The horses of the rath are named Tribrae, Ghorae, Deeghsharma, and Swarnnava. The rope with
which the rath is pulled is called Baasukhi. The rath of Subhadra is called Padamdhvaj. It is 129 meters
high and has 12 wheels. Black and red colored cloth is used on the rath along with 593 pieces of wood.
The protector of the rath is Jaydurga and the charioteer is Arjun. The flag of the rath is called Nadambik.
The horses of this rath are called Rochik, Mochik, Jeeta, and Aprajita. The rope used to pull the rath is called Swaranchudha. The Rath Yatra takes place every year on the Dvitiya day of the Shukla Paksha of the month of Aashadh. It is a grand festival in which devotees gathered from different parts of the country and the world pull the rope. It is also called the Gundy Yatra. It is believed that participating in the Yatra grants moksha so everyone is eager to pull the rope of the chariots. This yatra of Lord Jagannath ends at the Gundicha Temple. Jagannath Puri is mentioned in the Skand Puran, Nnaarad Puran, Padam Puran and Brahma Purann